Robert Oates describes how a wireless technology that radiates waves of peace and harmony into the surrounding society, can eliminate terrorism and war.

“Terrorism CAN be stopped. In this book, you’ll read about a groundbreaking scientific discovery – a discovery validated in nineteen published studies, yet ignored so far by government and the media – the discovery of a technology of peace.

As we learned on September 11, no government can protect its people against the faceless, heartless brutality of terrorists. But now you can take peace into your own hands. It’s possible now to switch on peace as simply as we switch on the lights.

Permanent Peace is a riveting story of scientific breakthrough written by Robert Oates, research fellow at the Institute of Science, Technology and Public Policy, and author of a dozen books. He describes the inside story on the scientific studies – why they have been accepted for publication by independent scholars – and how they demonstrate the power of this profound new approach to peace. You’ll also learn just how a Consciousness-Based science – a “wireless” technology that radiates waves of peace and harmony into the surrounding society, can eliminate terrorism and war. Rarely does a book appear with news that can change not only your own life, but also the life of the world. This one does – and you are invited to open it up and find out for yourself.” 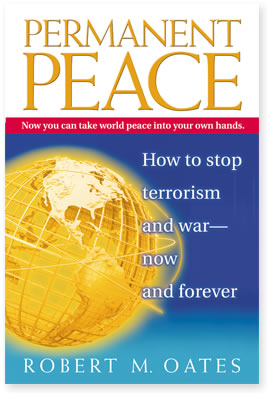