The constitutions of all nations express high ideals of governance and support the role of government in creating a high quality of life for their citizens.


The constitutions of all nations express high ideals of governance and support the role of government in creating a high quality of life for their citizens. Yet around the world, we find governments falling short of the ideals articulated in their constitutions. The reason is that the government is not the actual governor of the nation.


This understanding, developed by Maharishi Mahesh Yogi from the ancient Vedic tradition of knowledge, forms the central theme of the articles in this volume—that an integrated national consciousness can be achieved when a small percentage of the population practices technologies of consciousness, specifically, the Transcendental Meditation and TM -Sidhi programs, including Yogic Flying. The articles in this volume present both the theory behind these technologies and the extensive scientific research validating their effectiveness.

With integrated national consciousness, Maharishi explains, the entire nation comes into harmony with the laws of nature. Governments then function with the same skill in administration as evidenced by the laws of nature that effortlessly and automatically administer the infinite complexity of the vast galactic universe. By achieving problem-free administration, governments fulfill the diverse needs and desires of the entire population. As nations become strong and integrated internally, they rise in respect in the family of nations. This ideal of governance—that no problem can arise within the nation or penetrate the nation from without—becomes the reality of an invincible nation. 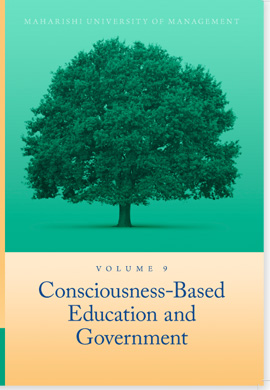 You're viewing: Volume 9: Consciousness-Based Education and Government $29.00
Add to cart