Under the guidance of His Holiness Maharishi Mahesh Yogi, experiences of a group of peace-creating experts have gathered at Maharishi University of Management and Maharishi Vedic City in Iowa, USA.

On July 23, 2006, under the guidance of His Holiness Maharishi Mahesh Yogi, a group of peace-creating experts growing toward 2000 in number have gathered at Maharishi University of Management and Maharishi Vedic City in Iowa, USA, to participate in group practice of the Transcendental Meditation and TM-Sidhi programs, including Yogic Flying. They came together to grow in higher states of consciousness and increase coherence in the collective consciousness of the nation.

The goal of the Invincible America Assembly is to create coherence and positivity in national consciousness through the field effect of consciousness by enlivening the holistic, nourishing values of Natural Law inherent in the Unified Filed of Natural Law, which is the field of Pure Consciousness, the source of all the Laws of Nature and all aspects of he universe

As such the experiences in this book represent not only a remarkable demonstration of the development of higher states of consciousness, but also a breakthrough in science and technology—a means for creating lasting peace and invincibility in any nation.

Order IAA Eeperience and Poetry books together and save $5.00 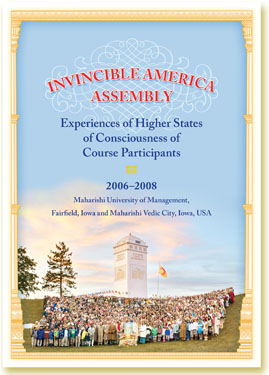