Experiences of Higher States of Consciousness of Course Participants

In Invincible America Assembly these experiences are correlated with both the ancient Vedic Literature and modern science. The goal of the assembly is to enliven the holistic, nourishing values of Natural Law inherent in the Unified Filed of Natural Law, which is the field of Pure Consciousness, the source of all the Laws of Nature and all aspects of the universe. As such the experiences in this book represent not only a remarkable demonstration of the development of higher states of consciousness, but also a breakthrough in science and technology a means for creating lasting peace and invincibility in any nation.

Poems from the Invincible America Assembly

In Reflections on the Source experiences are recorded that are among the most profound recorded in any tradition, in any era of world
history. They begin with the experience of the treasure of treasures within the field of infinite Silence the Self and progress to the experience of the flow of dynamism in the field of silence, with waves of bliss, unbounded expansion of awareness, waves of love and devotion, and rising unity with the near and far environment. 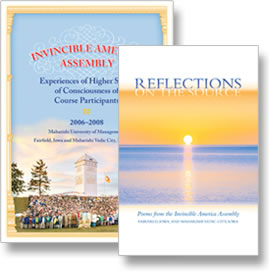 You're viewing: IAA Experience and Poetry books $24.95
Add to cart