An editorial Introduction to the Journal and the “Magical Origin of the Natural Numbers” by Paul Corazza, PhD

In recent centuries, scientists have found that many phenomena in nature obey physical laws that can be expressed precisely in the language of mathematics. Their successes have led scientific inquiry beyond the physical world to include what was previously considered metaphysical or non-material. Today, an increasing number of scientists are examining the nature of consciousness and its relationship to the human brain.

The International Journal of Mathematics and Consciousness helps fulfill the need for a forum of research and discussion of consciousness and its expressions.

While most models of consciousness propose that it is a product of chemical and electrical behavior within the brain, no current theory resolves the so-called “hard problem of consciousness”—how physical processes in the nervous system give rise to subjective experiences such as experiencing, thinking, feeling, analyzing, and creating. At the same time, it is undeniable that without awareness—without consciousness—we cannot think, perceive, dream, or love. On this basis alone, a scientific journal dedicated to exploring the nature of consciousness is timely and appropriate.

This second volume of The International Journal of Mathematics and Consciousness includes an introductory paper by Tony Nader, MD, PhD entitled Consciousness is All There Is: A Mathematical Approach. The paper’s primary postulate in quite simply, consciousness is all there is, thus reversing the customary paradigm of modern science that matter is all there is. The journal continues with an essay on the “Magical Origin of the Natural Numbers” by Paul Corazza, PhD 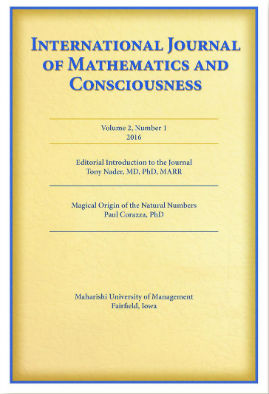 You're viewing: International Journal of Mathematics and Consciousness Vol 2 $20.00
Add to cart